Proton-exchange membrane fuel cells (PEMFCs) are a type of fuel cell that uses hydrogen and oxygen to produce electricity. PEMFCs are typically used in automotive applications, as they are efficient and have a small footprint. Mass air flow controllers, proportional valves, and pressure compensating valves play an important role in the function of PEMFCs. mass air flow controllers regulate the amount of air that flows into the fuel cell stack. This is important, as too much or too little air can negatively affect the performance of the fuel cell. Proportional valves are used to control the flow of reactant gas (hydrogen or oxygen) to the fuel cell. The valves are typically located at the inlet of the fuel cell stack. 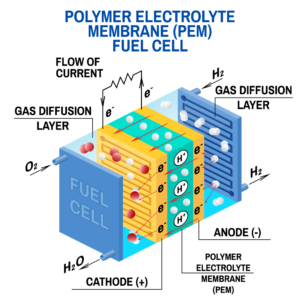 A Proton-Exchange Membrane Fuel Cell (PEMFC) is a type of fuel cell that uses an electrolyte membrane to separate the anode and cathode compartments. PEMFCs are often used in portable electronic devices, such as laptops and cell phones, because they are relatively small and lightweight.

How do PEMFC’s stay cool?

PEMFCs are a promising technology for powering a variety of portable electronic devices. However, they have several limitations that need to be addressed before they can be widely used. One of the biggest challenges facing PEMFCs is the need for an efficient and reliable air control system. The air system is critical to the operation of PEMFCs, and it must be able to the flow of oxygen to the fuel cells with a high degree of accuracy.

What kind of application utilize PEMFC

The most common type of flow control system used for PEMFCs is a mass air flow controller (MAFC). MAFCs are devices that measure the mass flow rate of a gas and then control the flow of the gas by regulating a valve. MAFCs are used in a variety of different applications, including PEMFCs.

How Does A CPAP Machine Work? Controlling Air Supply in Cooling Systems for Hydrogen Fuel Cells

A General Overview of Flow Cytometry Components and Applications

Request a Quote
CALL US (800) 704-7552
Manage Cookie Consent
We use cookies to optimize our website and our service.
Manage options Manage services Manage vendors Read more about these purposes
Preferences
{title} {title} {title}
0